Kulturen is like and oasis in the very centre of Lund. The museum, founded in 1882, spreads out across two city blocks. Inside the museum walls you are transferred from the hustle and bustle of the city to a peaceful and quiet environment. Here you are able to do your own journey through time and space. Kulturen has about thirty houses and buildings, surrounded by peaceful surroundings. The museum has an extensive exhibition activity.

The exhibition area itself is approximately 11 000 square metres. Here you will find a mixture of permanent exhibitions and temporary guest appearances. There are base exhibitions on design, university history and the Middle Ages but also ethical issues and popular culture. At Kulturen is also a playground and creative workshops on different themes for children and young people. Kulturen has roughly 100.000 visitors per year, and is owned by an association called Kulturhistoriska föreningen för södra Sverige ("Southern Sweden's Cultural History Association)

Lunds Konsthall is the result of a donation from "Gamla Sparbanken" (now "Sparbanken Finn") to the city of Lund. In 1953 the City Council decided to accept the gift from the foundation. The very same year, six architects were invited to take part in a contest for the design of Lund Konsthall. In 1954 the Prize Committee gave its unanimous opinion; Klas Anshelm's project was the right one for Lund. On the 1st of September 1957, Lund Konsthall was inaugurated featuring the exhibition "Swedish Art of Today" with fifteen painters and seven sculptors participating.The well-known architect, Klas Anshelm (1914-1980), created a building with light and space, with alternating high and low rooms, open balconies and semidefined galleries. There is a lot of open space for larger projects, but there are also intimate rooms for subtle distinctions. One space leads naturally to another in an "architectural walk", where the architecture and the expressions of art form a unity.

Klas Anshelm was very fastidious when it came to making comments about his own architecture and when he did, it was in terms of function, utility, economy etc. This doesn't mean that Lund´s Konsthall doesn't have a story to tell. The certain purposes and aims intended by the architect will merge into the substance and manifests themselves as signs in the physical shape. In spite of the fact that Lund´s Konsthall isn't quite intact as to the architectural expression, the building has escaped any radical reconstruction, but it was thoroughly renovated in 1997 thanks to a contribution from Sparbanken Finn. On the 6th of March 2004, after two month of a requisite renovation, Lund´s konsthall reopened with fresh-looking premises and with a new image included in the exhibition programme. It was once a building for large pictures and sculptures. Lund´s Konsthall of today is a place for interna-tional contemporary art. The temporary exhibitions are enriched with lectures, seminars, artists talk and musical events etc.

Skissernas museum ("Museum of Sketches") is a unique museum of arts, specialized in gathering sketches and models of monumental art in a public environment. The collection is one of the largest of its kind and consists of roughly 25 000 numbers from Sweden, Denmark, Norway, Finland, Iceland, France, Mexico and West Africa, among other countries. The emphasis is made on Swedish artists, but the collections also have world famous names like Matisse, Léger, Robert and Sonia Delaunay, Gleizes, Dubuffet, Orozco, Rivera, Siqueiros and Henry Moore. The museum was founded in 1934 as an archive for research by Ragnar Josephson, professor of history of art at Lund University. The fundamental idea was to gather sketches to illustrate and document the creative process; "the birth of the work of art". In 1941 the archive was inaugurated as a public museum in a former gymnasium on Finngatan, near the Library of Lund´s University.

Since then the museum has been extended by stages and is today one of Sweden's largest museum of arts with one of the most extensive collections of 2000th century art in the country. To that adds research archives and libraries. The University of Lund is head of the museum and it has the double role of being both a research institute and a public museum. A generous selection of the collections are exposed in the permanent exhibitions at the museum, which have an informal and studio like character that distinguishes it from other museums of art. Since autumn of the year 2001, Skissernas Museum has been closed in order to complete the largest rebuilding and extension of the 70-year-old history of the museum. Johan Celsing, architect from Stockholm, won the architect competition in 1999. After having evacuated the museum for two years, it has now moved back with the collections and is gradually putting up new base exhibitions in the museum halls. The museum was reopened in March 2005.

The Botanical Gardens (Botan) is one of the three central parks in Lund. It has a large number of visitors and is of high importance when it comes to teaching, pedagogical activity and research. The University owns and administrates the whole area. The opening hours are partly limited; the park is surrounded by a fence and is more fragile than ordinary parks. The park is a building memorial and the park´s history started when Tornlyckan was made available to the University in 1815 in order to establish a "Tree school for wild trees". This as a step in a project lasting for 10 years, that was to stimulate farmers to plant more trees. The older botanical garden, that was located next to Lundagård, had to move from its central spot. This land, that now belongs to the University, was used by J.G. Agardh to create a new botanical garden.

The Botanical Garden represent the ideal style of a park. The outer edges of the park have a more free form compared to the more strict form in the middle section. This is illustrated in Agardh's plant system; Theoria systematis plantarum. To have the ultimate conditions for different kinds of vegetation, ponds were dug out and the shaft pulp was used to make hills. The garden was expanded in the late 19th century as a new faculty building was constructed in the park called Östra promenaden. The city of Lund donated areas, helping the expansion of The Botanical Garden. In exchange the park always was to be open to the public.

The wall surrounding the park in the north and east is eventually older than the garden itself and should be regarded as firm ancient remains. The oldest building from 1867 - Agardhianum - and other buildings such as Orangeriet, Kolhuset and the Botanical Museum contributes to the character and wealth of experience of the Botanical Garden. The park has developed through the decades and is today a very vibrant garden that contains both extensive research and teaching as well as great esthetical and recreational values. The large variation of the environment, the occurrence of water and old trees provides the opportunities for at very rich vegetation and animal life.

For more information about The Botanical Garden - Click here

Excellent rates and packages when booking on our website.

Would you like to receive our newsletters?
Be the first to get the latest offers news tips directly to your email! 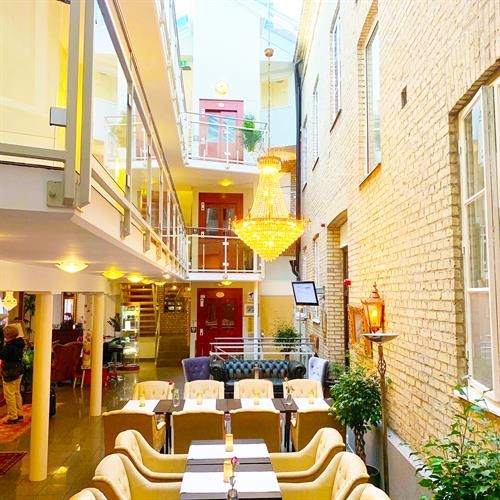 Welcome to the personal 4-star hotel with 60 rooms and Restaurant La Donna Birgitta in the middle of Lund.

During the ongoing pandemic, we have adapted our operations and taken a number of measures.

We now have the following service arrangements and as a hotel and conference guest you can feel safe with us:

The reception is open during these hours, every day:

These routines apply until further notice at Hotel Concordia in Lund:

-We have refurnished the public areas and follow the authorities' requirements.
-Hotel staff use respiratory protection when in contact with guests.
-Cleaning and hand washing of handles, etc. is done several times a day.
-Hands-on booths around the hotel and a contactless fever thermometer are located in the lobby.
-Distance markings on the floor (2 m) where queues can form, at the reception and in the breakfast room.
-Signs around the hotel that provide information according to the Swedish Public Health Agency's recommendations.

Social distance = Care for each other

Welcome to your safe & personal hotel in the center of Lund!